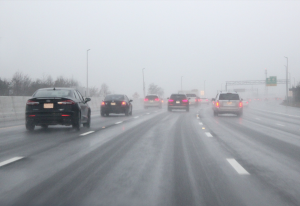 Skid resistance is defined as the force developed when a tire is no longer able to rotate on the pavement surface, and as a result loses traction and slides along the top of the surface. Skid resistance is an important parameter for evaluating pavement.

Inadequate skid resistance increases the chances of skid-related automobile accidents, prompting agencies to assess roadways for safety and upgrade those roadways if needed. Skid resistance is also used to evaluate the quality of various materials and construction practices.

The spin up tester is similar to the locked wheel tester when gauging a surface’s skid resistance but operates in the opposite way. Where the wheel is locked in the other test, this test method has the wheel moving or spinning when it hits the surface before the brakes are applied to the wheel. This method allows for significantly less wear and tear on the testing wheels. It’s also easier to calculate the final reading.

Skid resistance on roadways is a very important variable to keep track of when it comes to constructing roads for the public. Safety is our number one priority, and we work hard to provide our clients with the latest technology and methods to ensure that the roads are safe to travel on. Having a road that meets the proper criteria for skid resistance metrics greatly decreases the risk of car collisions due to slick or ill-prepared roads.

We recently worked on a project with the Los Angeles Department of Public Works, which is responsible for the public infrastructure and municipal services for over 10 million people in Los Angeles. Our overall services capabilities for this project include mix design consultations and specialty field and laboratory services such as surface skid resistance with the California Portable Skid Tester, gamma-gamma logging and cross-hole sonic logging, and micro surfacing emulsion (MSE) testing. Utilizing these services, we were able to assist the LADPW in creating safe and high-quality paved roads for Los Angeles!

At G3 Quality, we are industry leaders who are always embracing change and excellence. We are an elite team of engineers and professionals who provide world-class quality management, pavement engineering, materials design, construction inspection, and testing on infrastructure projects throughout California and the Western United States.