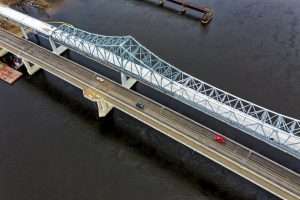 When it comes to infrastructure, there is always more to be done. Improving or creating roads, highways, railways, and airports is vital for effective and efficient travel throughout the United States. As technology advances and more and more people are traveling, projects big and small have started up again to accommodate or nurture the influx of traffic. Here’s a peek into what cool infrastructure projects are going on all over the United States this year.

The almost 50-year-old I-65/I-70 North Split interchange located in downtown Indianapolis is undergoing a whopping  $320 million renovation led by Superior Construction Co. This massive infrastructure project is underway, despite many bumps in the road due to COVID and the North Split being the second-most heavily traveled interchange in Indiana, making it very dangerous to work on. This specific infrastructure project involves rebuilding over 50 bridge structures and associated roadways. This is a massive project and one that has required some new design concepts, including creating a smaller footprint than the existing interchange without reducing traffic capacity. Superior Construction Co. will also vastly improve safety and remove bottlenecks by eliminating the weaving sections of the existing interchange.

This massive infrastructure project will begin this month and is being led by repair contractor Kiewit Infrastructure Group. This project is expected to run through the month of July and requires installing 20,000-ton, 4 ft x 8 ft post-tensioned brackets 150 ft apart to support eight 3-in.-thick rods that can accommodate 3 million lb of stress. Kiewit Infrastructure Group will then use nearly 3,000 bolts to attach 150-ft long steel plates weighing 53 tons on both sides of the beam. The 70-year-old bridge has seen its fair share of traffic, taking most of the I-40 bridge traffic as well.

The $11.6-billion infrastructure project that will reconstruct a pair of tunnels and add a new one under the Hudson River between New York City and New Jersey has finally been okayed to move forward in planning by the federal government. While this proposed infrastructure project is still in the planning stage, New York and New Jersey officials seem optimistic about the outcome. With the sudden influx of passengers on the railways and it being over 100 years old, there is a need for adding another tunnel as well as supporting and renovating the existing train tunnels. Keep an eye out for any updates to come on this huge project!

The Future of the High-Speed Railway

There has been talk of a high-speed railway in California for decades. With California’s population and levels of traffic, efficient transportation is not a common occurrence. While there have been many back and forths regarding this infrastructure project, this past week there was talk of hoping to move forward. “High-speed rail could be the technology that fully unlocks the potential of passenger rail travel in this country,” said Subcommittee Chair Donald Payne, D-N.J. This is the future of travel for the United States and comes at a steep price, but with such split views for the proposed infrastructure project, no one knows what the future holds.

Stay updated with the latest infrastructure projects all over the world; there are always new and exciting projects that use the latest technology and employ advanced methods of renovation and refurbishment.

At G3 Quality, we are industry leaders who are always embracing change and excellence. We are an elite team of engineers and professionals who provide world-class quality management, pavement engineering, materials design, construction inspection, and testing on infrastructure projects throughout California and the Western United States.