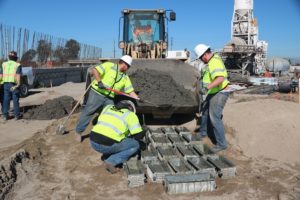 On April 17, 2020, the State of California Department of Transportation released their revised standard specifications (RSS) to the 2018 Standard Specifications. In this blog, we will talk about an addition to Section 40 that requires Quality Assurance (Q/A) to increase the acceptance sampling from 2 beams to 3 beams.

One of the past issues with acceptance testing was that the Q/A was only required to fabricate 2 beams and be tested at 28 days. In some cases, certain Districts may have 1 additional beam they will break at 10 days to monitor the progression of the strength gain and whether the 28 days may fail or pass. This caused many challenges for the contractor, as there can be variability in casting beams in the field, initial curing, transporting, and final curing in sandpits. In the past, this caused a high probability that one beam could test significantly lower than the second beam; one beam at 28 days can break at 450 psi and the second beam at 600 psi. The average would be at 530 psi, which is considered a failing test and causes a dispute over the beams.

The test for CTM 523 is intended to have a beam with a deviation of not more than 16% from each other, and if it is over 16% then lower beam would be discarded. This was the intention, to show if a beam is poorly cured or damaged, it could be discarded and not be a part of the acceptance. However, in the example above, the average (530 psi) would place the difference at 15% and therefore both beams are to be used for the average and the set fails.

The State recognized this issue and decided to increase the sample size, ‘n’, from an average of 2 beams to an average of 3 beams. Given the variation with individual beam results, this increased sample size provides a better representation of the material being evaluated and ultimately the concrete batch.

Now let’s look at our above example: if you have beam 1 at 450 psi, beam 2 at 600 psi, and beam 3 at 600 psi your average is 550 psi. The difference now would be 19%, and therefore the 450 psi beam would be discarded as an outlier beam. This, of course, works the other way around as well, two low beams and one high beam would also discard the higher beam from the average as an outlier. With the sample size now being n=3 instead of 2, we should see improvement on the averages. We are looking forward to this change along with using ASTM C31 for curing and ASTM C78 for breaking beams, as this also reduces the variability and solves disputes over beams results.

G3 Quality, Inc. is here to provide any further information you may need regarding how to implement all the changes to the new 2018 RSS Section 40 on your current or upcoming projects. We’ve also provided more information on Changes to Section 40 regarding mix designs and low beam strength testing.

At G3 Quality, we are industry leaders who are always embracing change and excellence. Research and strategy are at the forefront of our operation. Our services include quality management, materials testing and inspection, geotechnical engineering, pavement design, and materials designs on infrastructure projects in California. To learn more about how G3 Quality can contribute knowledge, expertise, consulting, and professional services to your project, contact us.