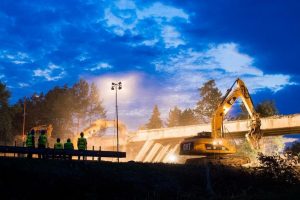 This week, a magnitude 5.8 earthquake rattled Eastern Central California near Lone Pine and was widely felt at G3 Quality’s Bakersfield office. It came just one day after a deadly earthquake in Mexico. Many devastating earthquakes in the past have emphasized the need to minimize seismic risks in the United States highway system.

Highway systems contain many elements including pavements, tunnels, slopes, embankments, retaining walls, and more. However, some of the most vulnerable structures in the highway system tend to be bridges. Historically, bridges have cost millions of dollars in repairs when damaged or destroyed. In 1971, at least a dozen bridges were damaged from a deadly earthquake, requiring California to change bridge designs.

“After that happened, if you drive around California and look under the bridges, there are metal restrainer cables tying the bridges down to the support piers so they can’t fall off like they did,” said Dr. Michael Chajes, professor of civil and environmental engineering at the University of Delaware. “We also saw a lot of columns fail (during that earthquake), because we didn’t understand at that point the effects that earthquakes would have on them.”

Continuing with seismic safety and improvement, after the Loma Prieta earthquake in 1989, Caltrans began its ambitious program to retrofit 2,000 seismically deficient California bridges.

National seismic bridge design standards have been in place since 1992. These standards are regularly updated to incorporate lessons learned from the behavior of bridges during earthquakes.

In California, improving the State’s highway systems when it comes to bridge safety is a mixture of strengthening existing bridges and imposing new geographically-appropriate seismic design standards on new bridge designs. According to Caltrans, every bridge shall be designed with an Earthquake Resisting System that ensures a load path for gravity loads and provides sufficient strength and ductility to achieve specific performance criteria.

Sacrificial Elements – Bridge elements that are typically designed to disengage in order to limit forces transmitted to adjoining capacity-protected members.

For a full description of the standards regarding how Earthquake Resisting Systems are incorporated in bridge design, read the Caltrans Seismic Design Criteria.

At G3 Quality, we are industry leaders who are always embracing change and excellence. We are an elite team of engineers and professionals who provide world-class quality management, pavement engineering, materials design, construction inspection, and testing on infrastructure projects throughout California and the western United States.